When Genesis, the luxury offshoot of the Hyundai brand, decided to target millennial car buyers, it did so by investing heavily on the vehicle design and enhancing its green product segment, to suit the taste of younger shoppers who are design-savvy and environmentally-conscious.

Genesis announced that it will come up with at least four types of green cars by 2025 and position their brand in the premium car market as sustainable and future-oriented. Their battery-powered, two-door concept car “Mint,” which premiered in New York International Auto Show in April and recently exhibited at Hanam Starfield on the outskirts of Seoul, was part of the marketing schemes to reach their target and a bold design experiment to show hidden potentials of Genesis, which is still relatively new in the premium car market. 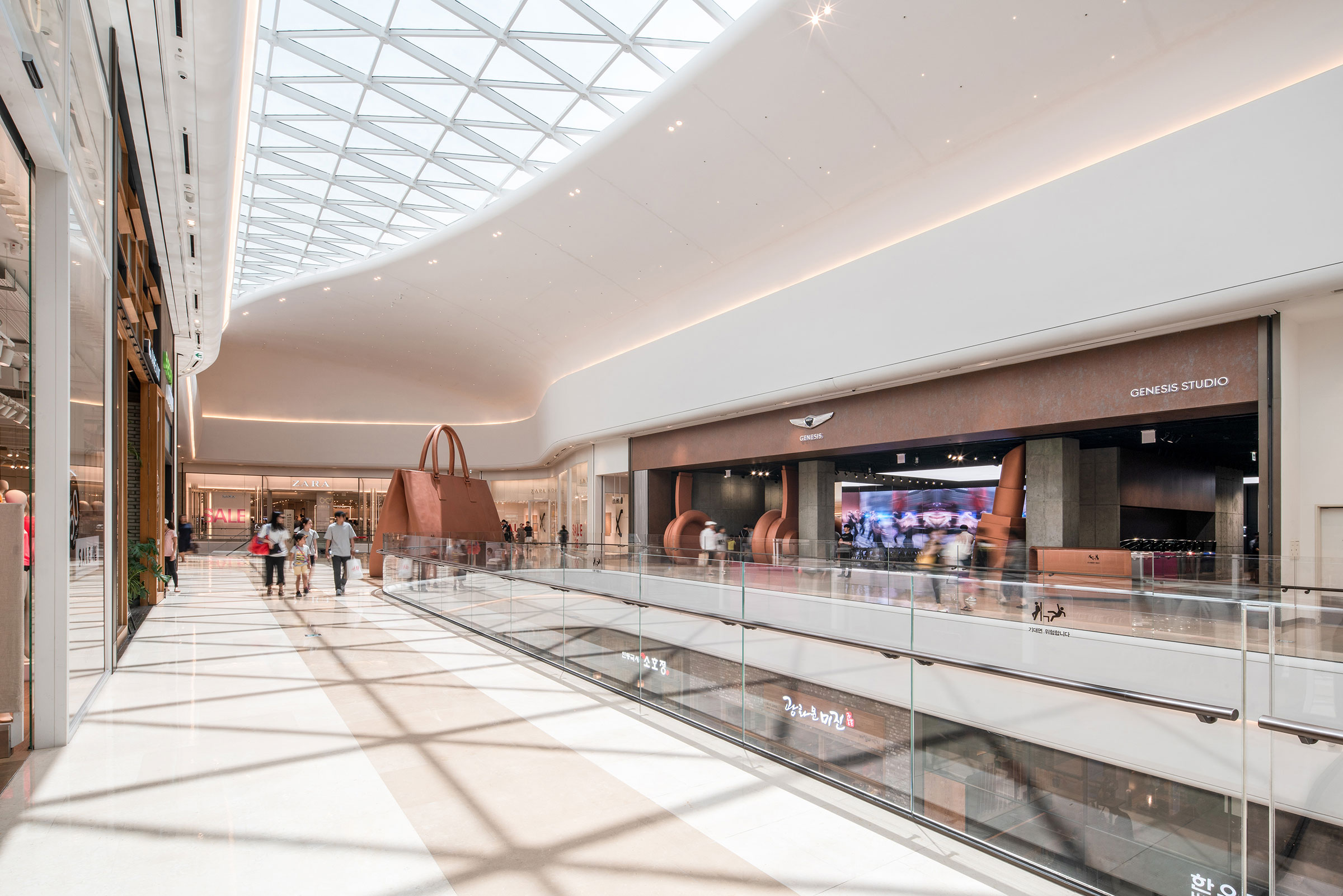 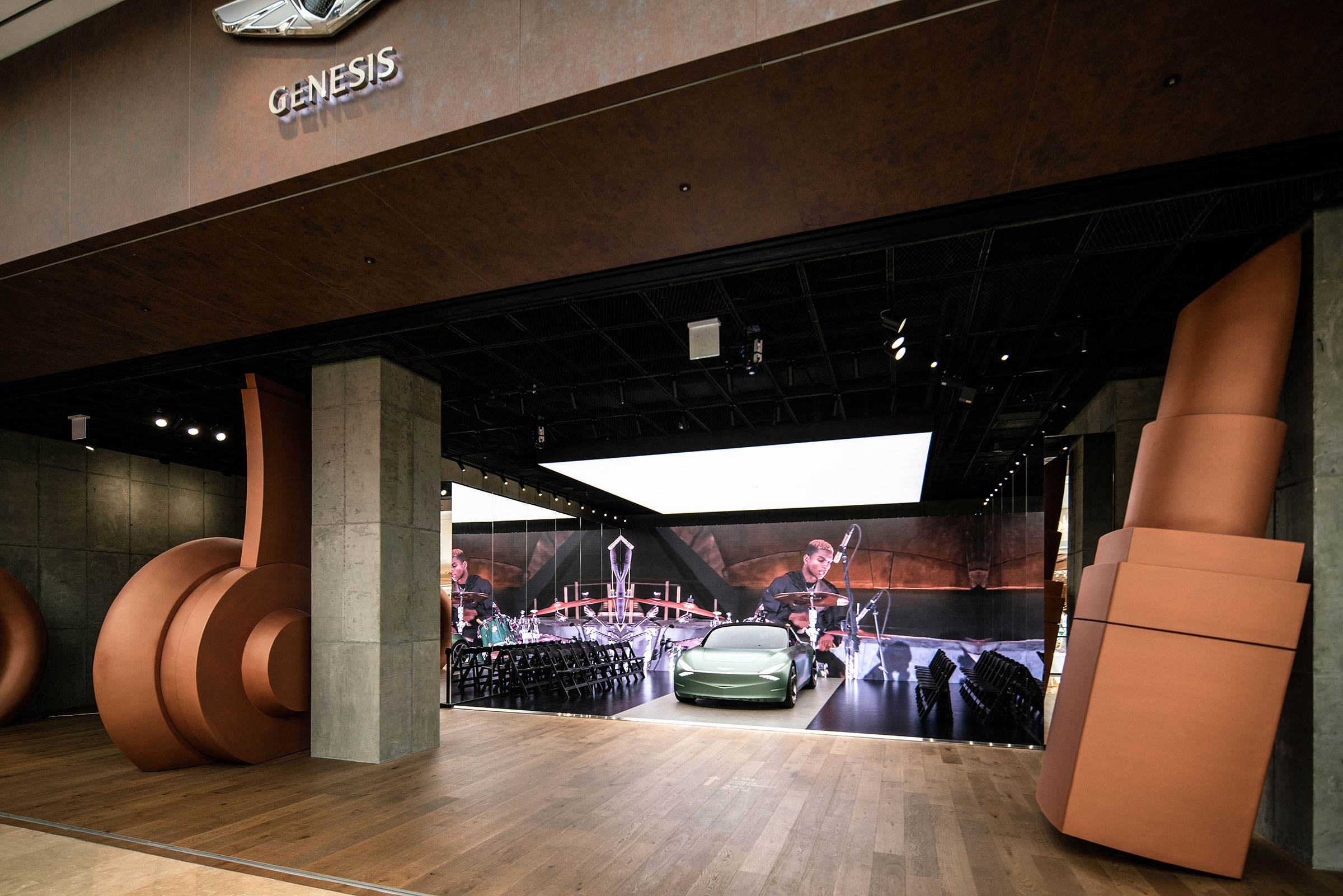 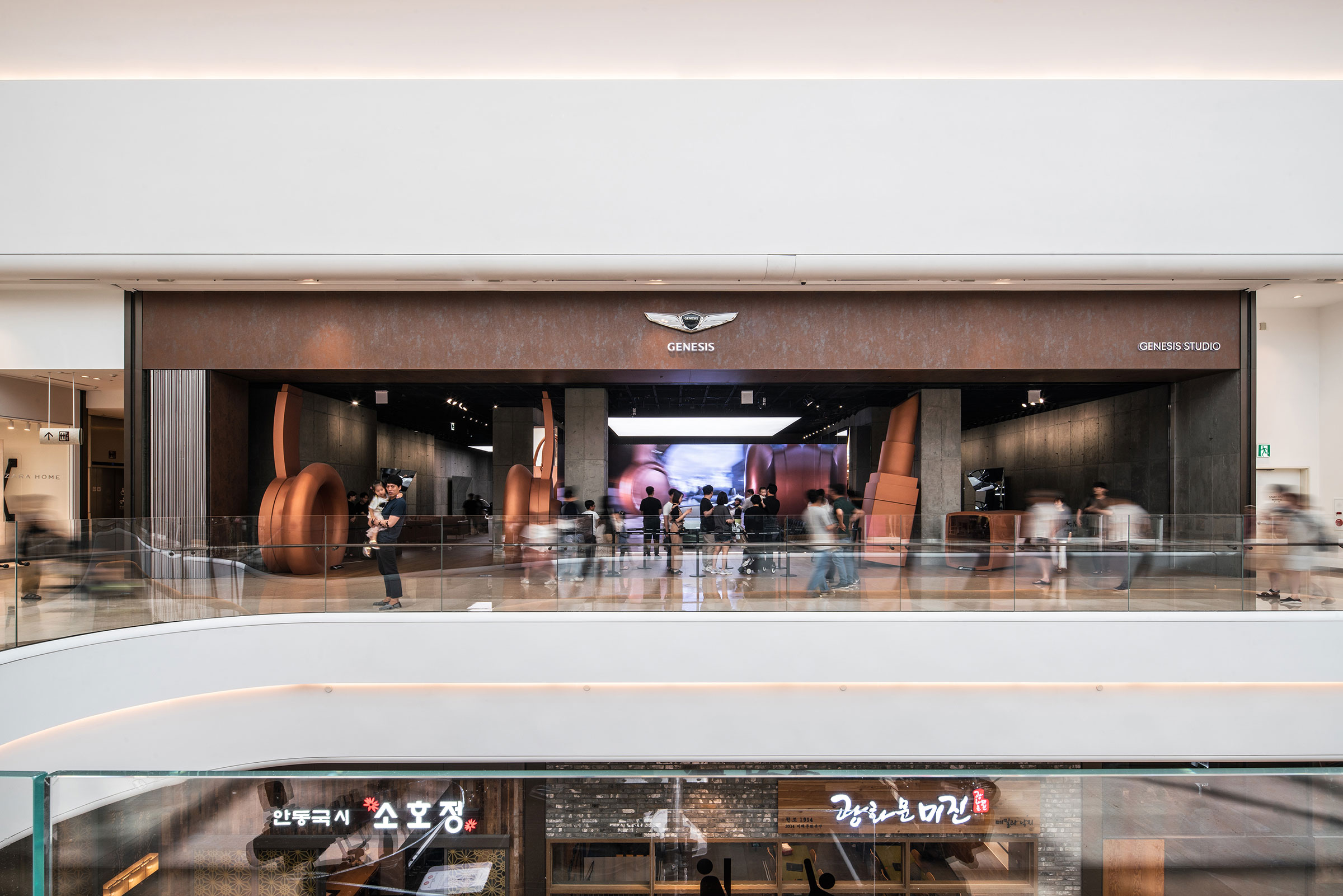 Like the name, Mint is modern, sporty and tiny – dubbed “the pocket-sized luxury icon.” On the exterior, it’s coated in matte green, which makes it interesting both visually and conceptually, as it suggests a metaphor of an electric vehicle. Created in collaboration between the company’s design experts in Germany, the U.S. and South Korea, Mint aims to appeal to women and fashion-conscious millennials that value tech-savvy and urban lifestyle, annd consider the fine balance of style and functionality when choosing a vehicle. 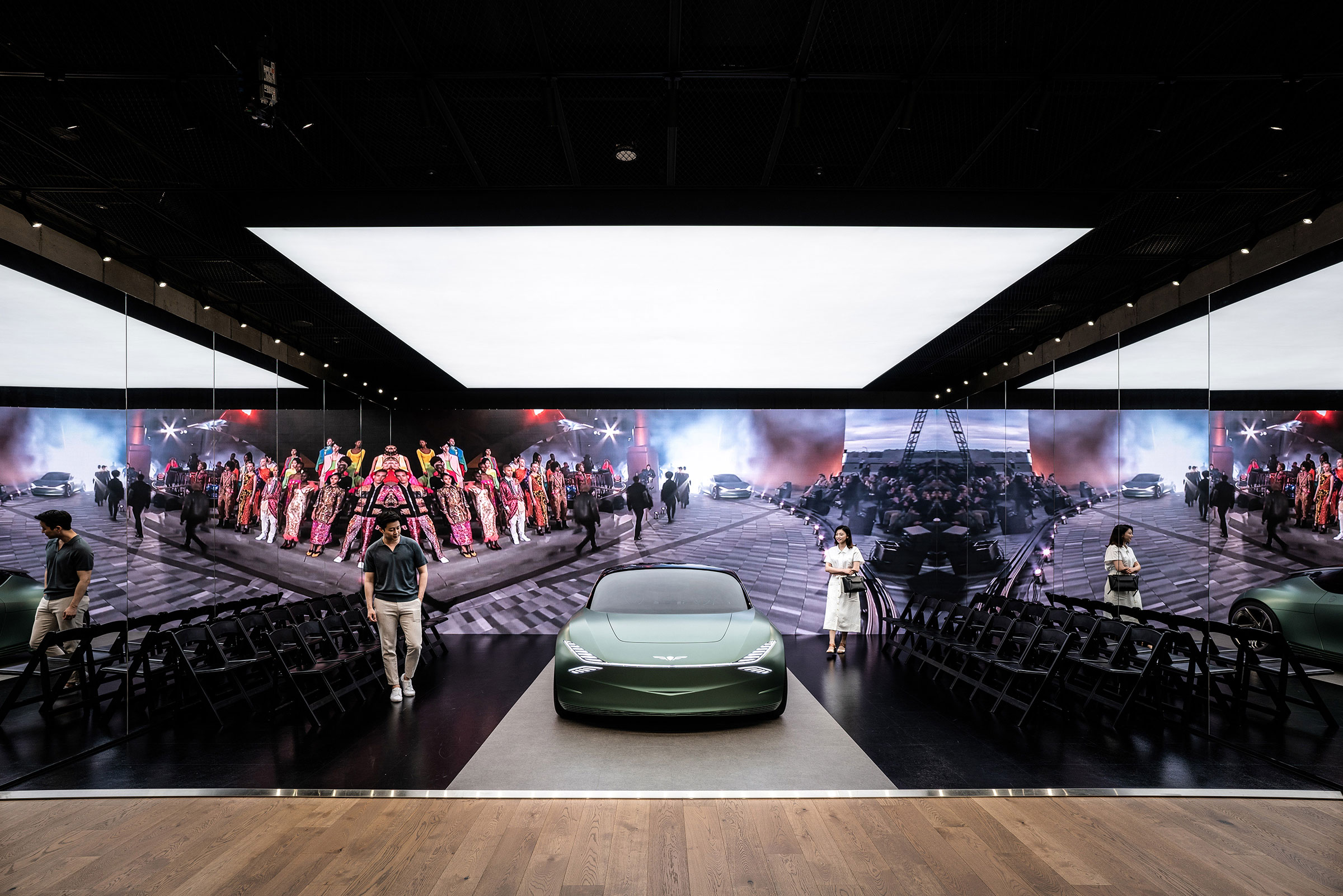 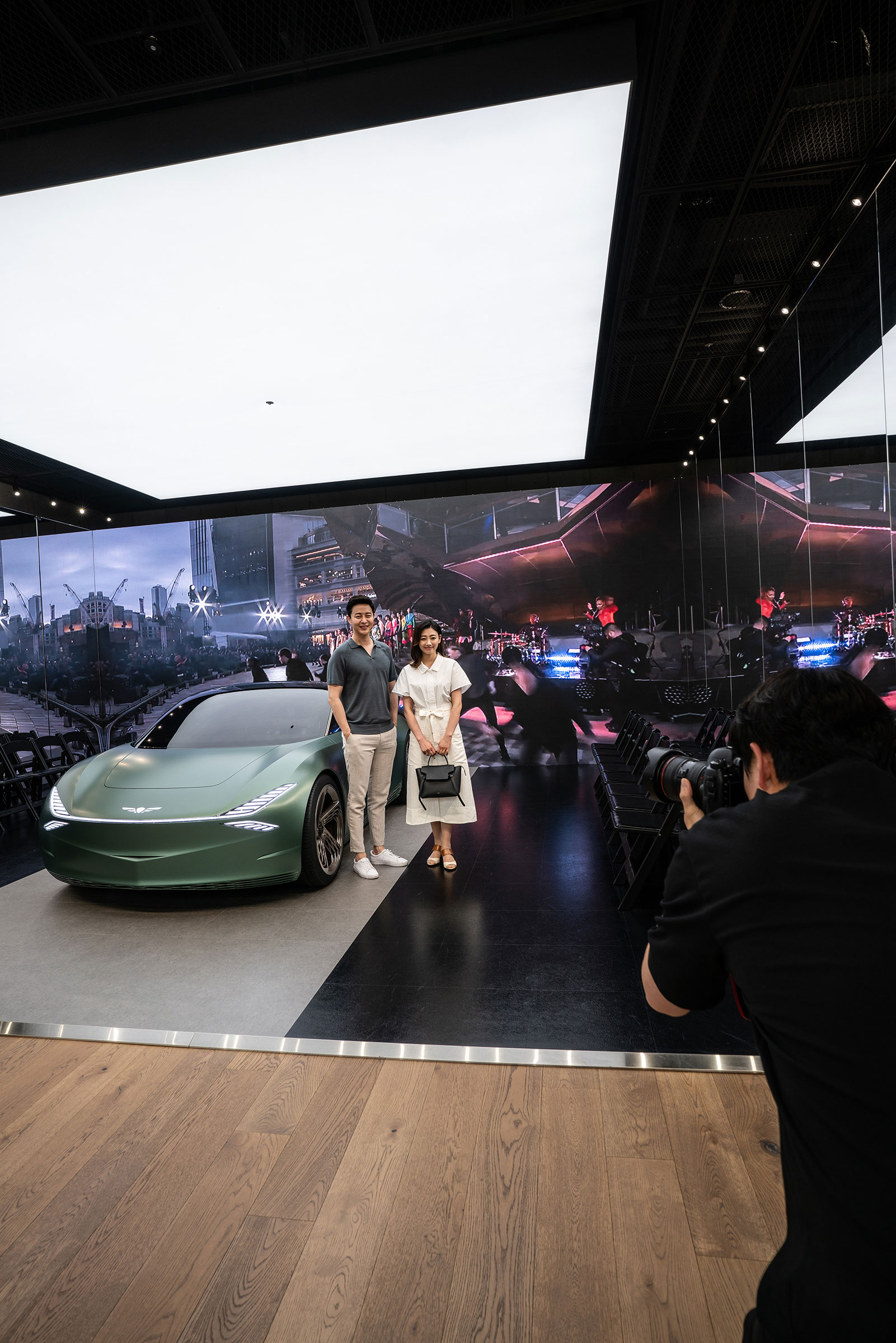 Design-wise, it’s innovative and futuristic. The two rear doors, which open in scissor style instead of a large trunk or rear hatch, allow more storage space and easier access in densely-populated cities like New York or Seoul where spaces are limited and cars park bumper to bumper. Mint also features innovative tools and unusual digital features that enhance the driver’s experience of a city car; small screens of Graphic User Interface (GUI) mounted in the center of the steering wheel inform key vehicle functions through touchscreen buttons. Instead of side mirrors, the video cameras on each side allow drivers to secure a wide view of the driving environment. The G-Matrix pattern on the wheels facilitate airflow circulation around the battery floor. The car’s high-powered battery is capable of driving up to 200 miles on a single charge with a 350kW battery. Overall, it features more than 28 technologies that have been newly added by Genesis.

Despite its size and design, Genesis Mint still retains classic elements of a luxury sedan, and insists that size does not always define price or luxury. Mint has floor-to-ceiling leather adorned in a classic camel hue, an extended panoramic window and minimalist design overall which the Company describes as “athletic elegance“ and was influenced by the Korean tradition of embracing the beauty of empty space and is common to most Genesis vehicles. The vehicle interior is refined, and was inspired by a mix of European furniture design and traditional Korean patterns. 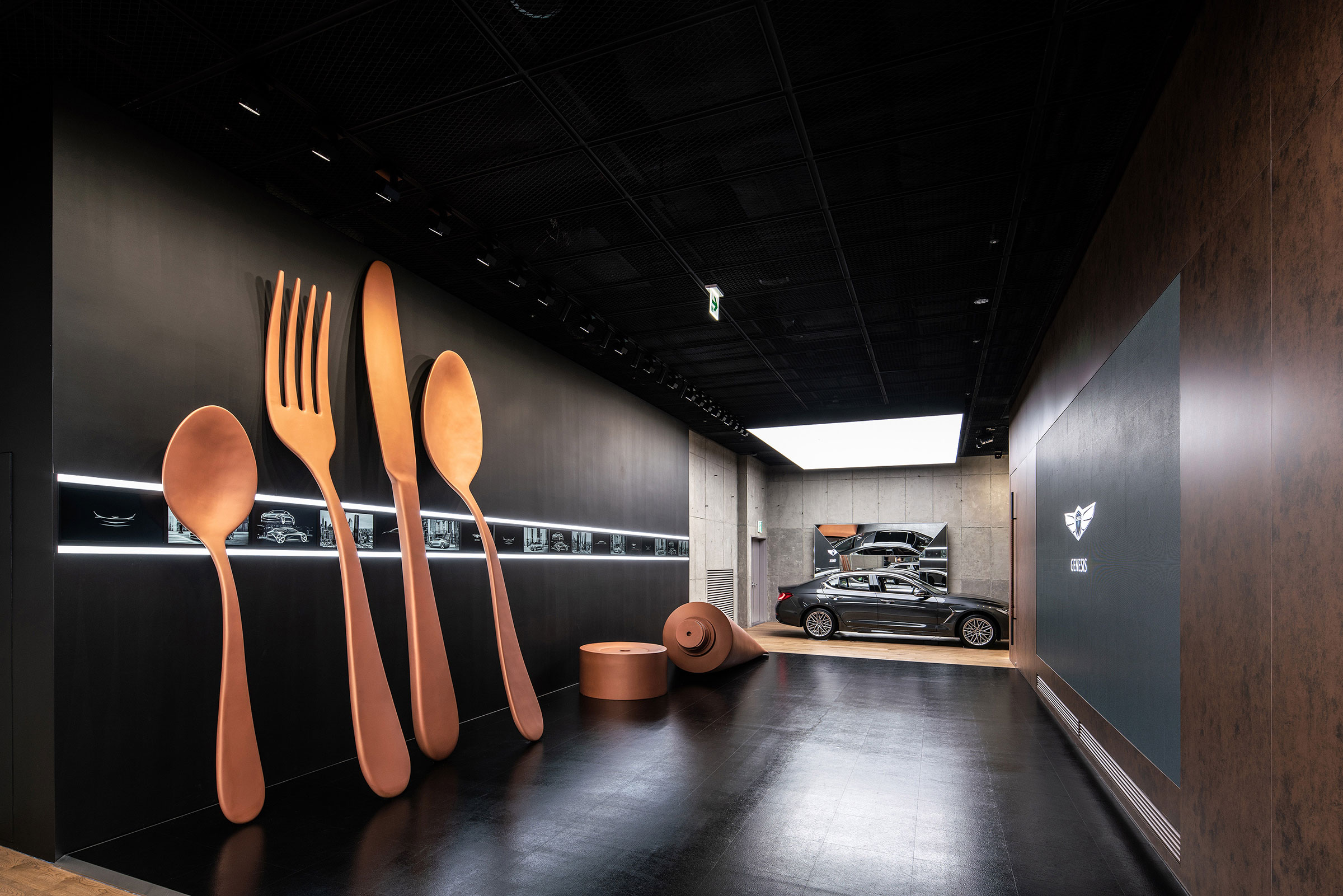 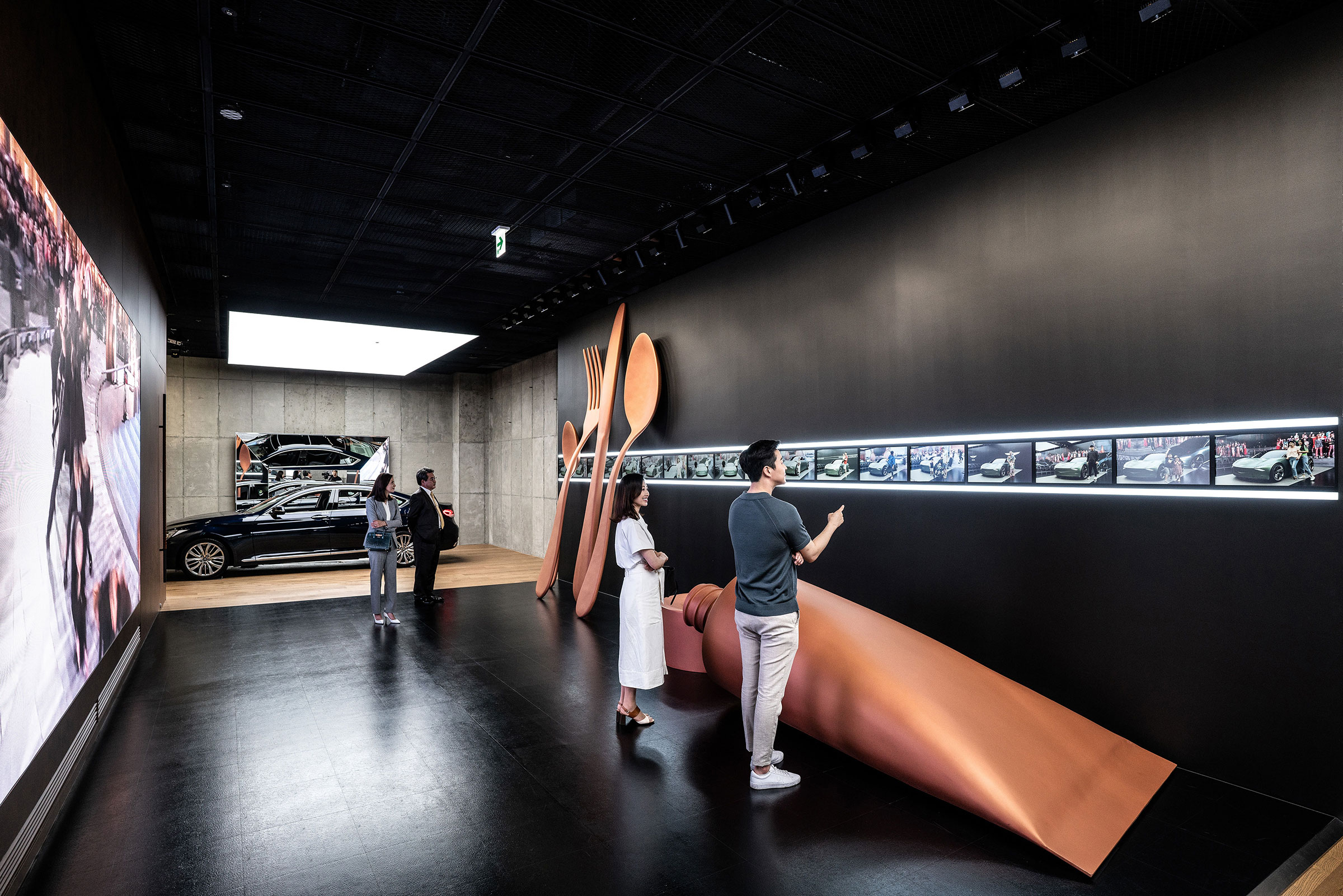 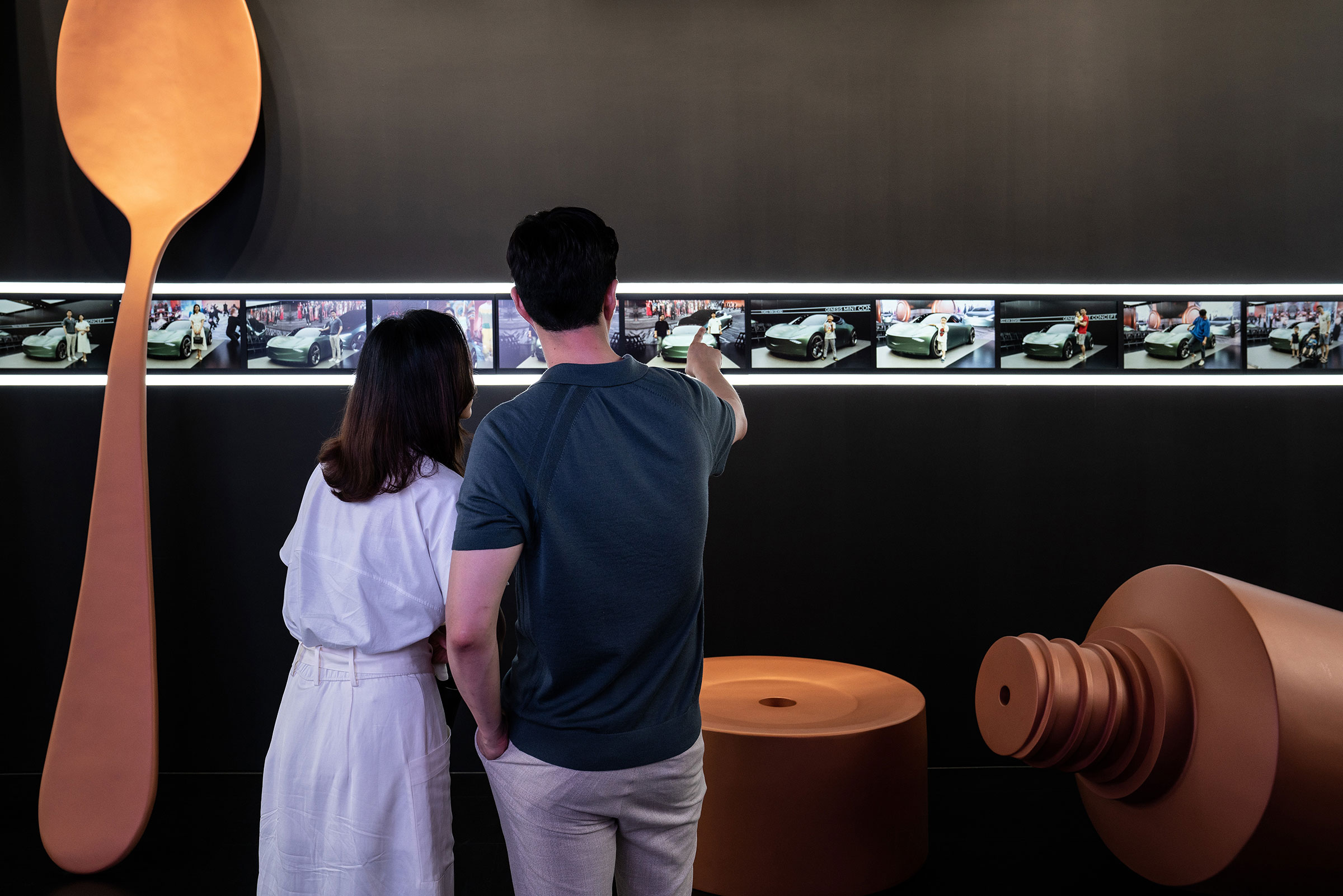 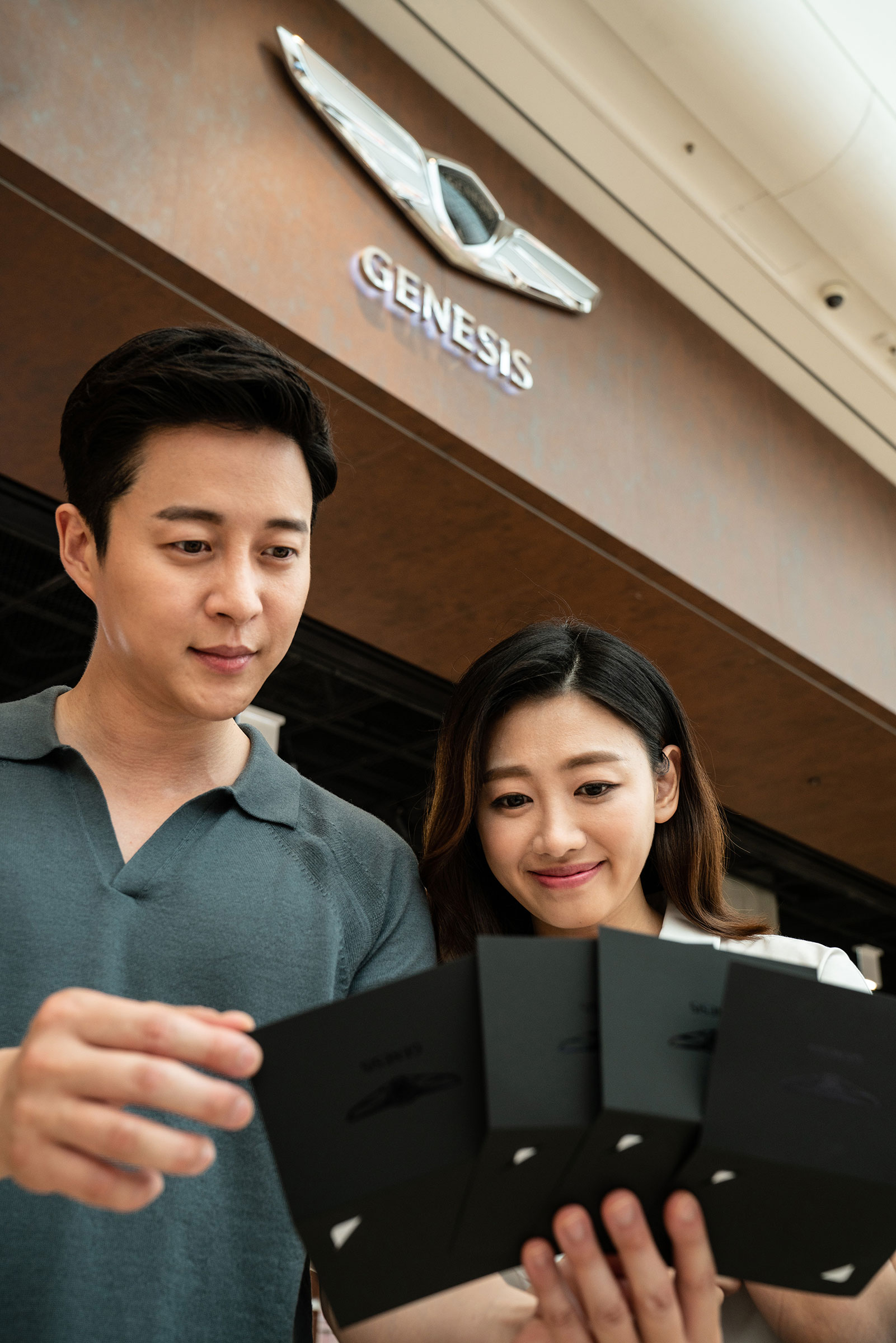 At the exhibition space at Hanam Starfield, the Genesis team set up the stage in such a way that deliberately highlights the vehicle size. The stage where the vehicle is parked is surrounded in black, giving off an industrial atmosphere to suit the image of a cool city car. The video projection on the walls – clips from a media preview of Mint held in the Hudson Yards in New York - features a fashion show with runway models clad in designer brand clothes, contemporary choreographers and DJs engaged in a unique performance before the main showcase. Like Hudson Yards, which reflects urban sensibility, Hanam also attracts fashion-conscious shoppers - Mint’s main target.

While merging fashion and car is not an entirely new concept, the exhibition at Hanam is particularly engaging, as it adds an interactive layer to a conventional showroom. As a playful part of the showcase, Genesis invited the visitors to take souvenir photographs of themselves next to the vehicle and simultaneously view their images on a display panel on the back side of the studio. The interaction immediately invites audience participation and allows shoppers a chance to personally engage with the brand in an entertaining manner. The project is an extension of their earlier experiment with G90. During the exhibition for G90, the exhibition room automatically recognized a color from the visitor’s outfit or accessories as they entered the space. Within minutes, the car and the surrounding walls changed into the particular color, creating a new sense of space.

In many ways, the exhibit in Hanam introduces unconventional style of a car showroom by highlighting Genesis‘ progressive design on the forefront of a vehicle showcase, expanding its brand values and interpreting urban sensibility from a new perspective. 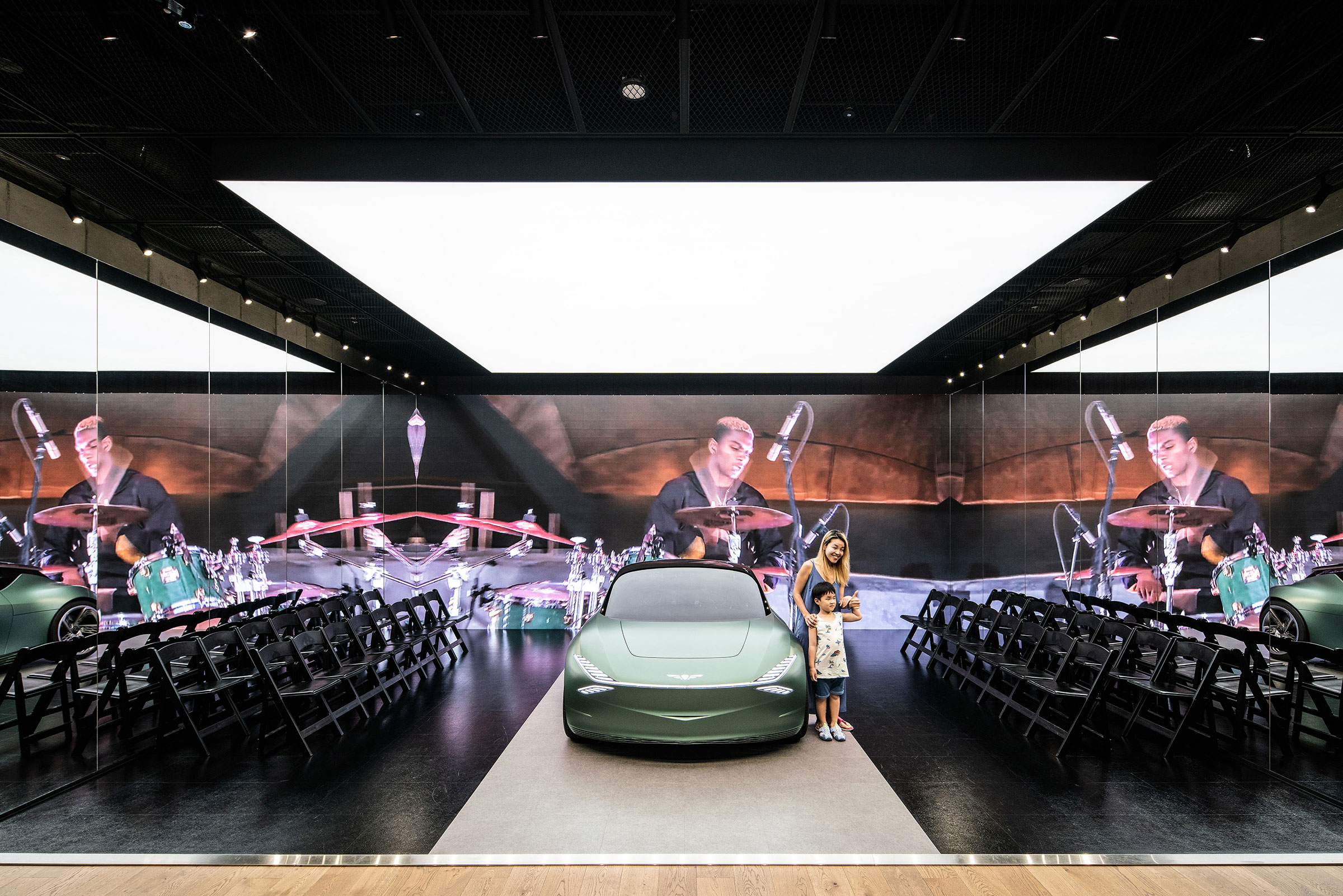